Working in collaboration with aphasia specialist Melanie Derbyshire for the Stroke Association at the UK Stroke Assemblies 2014, 2015 and 2016. We lead a series of ‘Creative Conversations’ workshops for stroke survivors with aphasia, a condition that impairs the ability to produce and understand speech after brain trauma.

A selection of instrumental music tracks are played on loop in the background. Participants are encouraged to listen, relax and enjoy the process of ‘free drawing’ using the veritable smorgasbord of art materials on offer. By letting the music instruct their hand to make marks and ‘break the page’, participants are guided to move away from the often ingrained and restrictive ideas of ‘what art is’ and instead open themselves up to the joy and freedom that comes from drawing to music.

Designed and developed through my own experiments and discoveries through drawing to music during my FdA Foundation Art degree course 2012-2013 (see my work here).

I loved the simplicity of this delegate's piece: A lady in the sun.

This lady had never painted in her life before!

The piece in the foreground directly inspired by Philip Glass's 'Rubric'. This chequerboard motif appeared in a couple of other delegates work whilst this track was playing!

This gentleman shared his stroke story with me. Heading forward, on the route to recovery, one step at a time

Douglas, a former Mathematics teacher. He really enjoyed the freedom of the activity, and was guided almost exclusively by the music playlist - an excellent participant!

The delegate who created this told us she was angry. A stroke survivor herself, her brother is in hospital having recently suffered a stroke. And she's just lost her husband too.

This couple worked together to create a beautiful floral themed piece using wet-on-wet techniques which made very beautiful bleeds and areas of paler colours.

This woman is an art lecturer and museum curator. She approached the activity with innovation in the application of her paint - using fingers and catkins!

This woman has suffered 3 strokes which has rendered her speechless and wheelchair bound. She is clinically depressed and has made attempts at suicide. To me, her drawing represents hiding and entrapment by an external power greater than herself.

I’ve always considered that the visual artwork acts as a catalyst for the real ‘work’ to happen, which is the conversations that ensue as participants immerse themselves in the activity. The body relaxes, oxytocin is released, heart rate drops and communication (that is often so difficult or impossible for stroke survivors with aphasia) flows much more easily. This work is vitally important for stroke survivors and their carers as a way for them to relax and communicate the challenges they face on a daily basis. 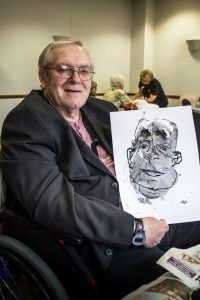 This is Michael with his drawing from the UK Stroke Assembly 2014. Meeting Michael a particularly memorable experience for me.

Before his three strokes, Michael was a rather prolific painter, cartoonist, playwright, director and producer. The strokes had left him mostly wheelchair bound with the loss of fine motor skills in his right hand. He is also unable to write now as he cannot form continuous thoughts or plots. His wife came up to me at the activity table and said “would you mind if my husband joined in? I’m desperate for him to draw again but he has no interest in it. All his art things are in the cupboard at home as he can’t bear to see them.”

She brought him in and left us to it. He took quite a bit of encouragement initially to make some marks. I tipped out a pool of black ink onto his sketchbook and showed him ways to move it about with twigs and sponge dabbers to create lines and marks. He was well away after that. Blotting away some of the ink to create lighter, dryer patches. He asked for a marker pen which I duly passed to him.

I was watching him working all the time whilst we were talking and it wasn’t until he’d finished that I realised he’d created a rather stunning portrait of a character from his imagination. The creative subconscious comes through all conscious barriers. He was so proud of his work and his wife was beside herself with emotion. He’d not created anything for many months.

I felt a huge wave of pride wash over me that my activity had enabled this fellow to put aside all his worries and fears and just create. A moment I will never forget.